Make a general donation to the 2022 Walk to End Alzheimer's - Coachella Valley, CA 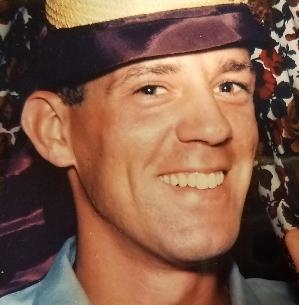 I'm walking for you, dad. I miss you!

This is my dad, John.  A terrific and proud retired Army sergeant from Michigan who lived his life full throttle.  He had a stroke when he was 68 and while he physically recovered from the stroke, he died with vascular dementia.  I will never forget the shock I felt when he introduced me to his doctor as his wife.  It was painful to see the confusion in his beautiful eyes and face as he tried to understand why I said I'm not his wife.  Until dementia of any kind touches a family, it is hard to know or explain how this disease feels.  We must do something to end this awful disease, so I'm walking for my dad and hoping researchers can find a cure.

Right now there are more than 5 million Americans who have Alzheimer's and that is expected to nearly triple to as many as 16 million by 2050.  We are all living longer and our future is at risk and we must find a way to change the course of this disease.  Alzheimer’s disease is relentless. So are we.