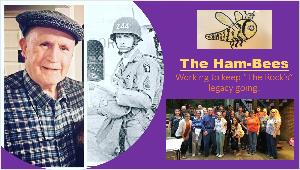 Team page of The Ham-Bees

Support our team for the Alzheimer's Association Walk to End Alzheimer's®. We are walking in honor of 1SG Eddie Gene Hamby, who was a faithful and loving husband, father, grandfather, uncle, and friend. He was a man who lived his life loving and providing for his family, while serving God, his country, and his community. He married the love of his life, Martha Jeanine, in 1953 and professed his love for her until he drew his last breath. Together they had 4 beautiful children, 10 amazing grandchildren, and 15 wonderful greatgrandchildren.

He was a man of service and lead by example. This began with his 23+yrs in the US Army, where he was in the 82nd Airborne and Green Beret Special Forces. He did tours in Korea, Vietnam, Dominican Republic, and Panama Canal Zone. During his military career he was given the nick name “The Rock” and received many recognitions and honors. Following retirement from active service he served as a VA officer and then as Civil Defense Director for Chambers County. He then continued to service the community as EMA Area Coordinator for the State of Alabama for 20yrs. Later in life he continued to lead by his example by volunteering with the Red Cross, EAMC Hospital, Christian Care Ministries, East Alabama Food Back, People Against Litter, and Prison Ministries. He was also an active member and leader in his church.

Last year this amazing man lost his battle with Alzheimer. He fought to the very end. His legacy of love, faith, compassion, service, dedication, duty, and hard work lives on in his family and those who knew him. He was truly “The Rock,” as he provided the stability and strength needed to keep one grounded even when things around him were falling apart!