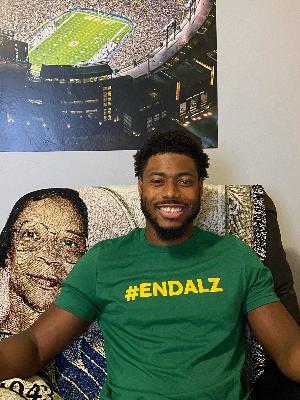 In September, #31 Green Bay Safety, Adrian Amos made a pledge to donate money to fight Alzheimer’s disease based on his on-field success during the 2020 football season. At the end of an amazing season, Amos fulfilled his commitment with an $83,000 gift to the Alzheimer’s Association, in honor of his grandmother, Geraldine Thompson, who lost a lengthy battle with Alzheimer’s disease on June 18, 2020.

“My grandma instilled a work ethic in me, which has helped me achieve many accomplishments in my life,” said Amos. “I’ve been blessed, and so it’s important to me to be able to pass those blessings on to others. I am honored to make this donation that will help so many families in Wisconsin who are struggling with Alzheimer’s and dementia.”

In December, Amos also encouraged fans to get involved in the cause and join his efforts through a $31 green and gold #ENDALZ t-shirt fundraiser. The six-week initiative raised an additional $40,000 for the Alzheimer’s Association, with donor support coming from every corner of the state, and across the country.

“The Alzheimer’s Association truly has an MVP in Adrian Amos,” said Dave Grams, executive director, Alzheimer’s Association Wisconsin Chapter. “We simply can’t thank Adrian enough for his personal commitment to advance the fight against Alzheimer’s disease, through advancing vital research and providing education and support to those who face dementia every day and their caregivers.”

Please support Adrian in the fight against Alzheimer’s and all other dementia by donating to his team here.

Adrian's Grandmother, Mrs. Geraldine Thompson, or as he called her "Grama", was a constant presence in the lives of her 7 children, 15 grandchildren, and a host of great grandchildren.

Her giving spirit extended beyond her family and made an everlasting impact on Adrian. After a lengthy battle with Alzheimer's Disease, she was called home peacefully on June 18, 2020. Adrian's passion to help end Alzheimer's Disease runs deep and this season he's pledging to make a difference!

Join Adrian's team by donating and your name will end up on his Team Wall, below!