Adrian is fundraising to honor 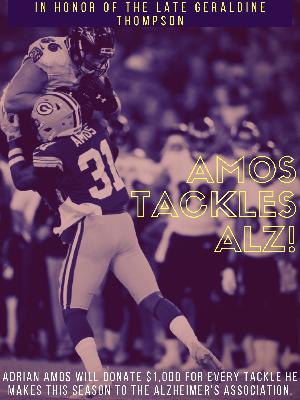 Green Bay Packer Safety, Adrian Amos, both walks and tackles to end Alzheimer’s. He is donating $1,000 for every tackle he makes throughout this season to the Alzheimer’s Association in honor and memory of his grandmother, Geraldine. As of the 11/29 Packers game, he has raised $51,000 and expects much more.

Let’s support Adrian while he tackles to #ENDALZ by donating $31 during the month of December to receive a green and gold #ENDALZ t-shirt!

You have the whole month of December to donate and tell your Packer fan friends - you don’t have to be registered for the Walk to receive a shirt.

In honor of his Grandmother, Adrian Amos has made a personal pledge to fight Alzheimer's. At the end of the season Adrian will donate $1,000 for every tackle he made to the Alzheimer's Association Wisconsin Chapter.

Through the end of the football season, follow his journey to help #ENDALZ!

Adrian's Grandmother, Mrs. Geraldine Thompson, or as he called her "Grama" was a constant presence in the lives of her 7 children, 15 grandchildren, and a host of great grandchildren.

Her giving spirit extended beyond her family and made an everlasting impact on Adrian. After a lengthy battle with Alzheimer's Disease, she was called home peacefully on June 18, 2020. Adrian's passion to help end Alzheimer's Disease runs deep and this season he's pledging to make a difference!