Make a general donation to the 2021 Walk to End Alzheimer's - Upper Valley, VT/NH 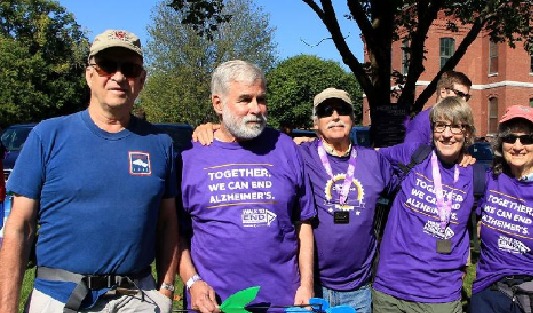 Team Andy...Together We can do This!

Andy Harvard believed in team work. He lived his life building or being part of teams that saw no challenge as too big or difficult to face, including the fight to end Alzheimer's and other dementia. Andy lost his battle with Younger Onset Alzheimer's last year, but he continues to inspire and lead us. Please join the many who knew and loved Andy and be part of the Movement to End Alzheimer's.  Please join and support Team Andy in the Upper Valley Walk to End Alzheimer's. Because we will be safeguarding everyone's health, we won't be able to walk together as a large group this year. Instead, we'll  be walking everywhere with small groups of friends or family to be part of this important event! Please register to be part of Team Andy and join us on October 10 from your favorite trail, river, ocean or neighborhood street and be part of the fight to end Alzheimer's.

The Alzheimer's Association Walks to End Alzheimer's are taking place in more than 600 cities and communities around the country. This is the world’s largest event to raise awareness and funds for Alzheimer’s care, support and research. Be part of the solution! We can make a difference in the battle to end Alzheimer’s.

We can do this!