Louis is fundraising to honor 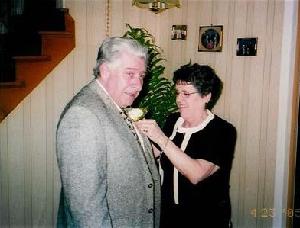 I would like to share a story my Dad wrote (a Vermont farmer) after my Mom pass away from #Alzheimer in August 2012.... Loving husband and caregiver... In his own words... #Walk2EndALZ

The first time Aline had gone to see Doctor Amy Roberts for this problem; Dr. Roberts explained to her about Anxiety and Depression and I recall Aline telling her, “Thank God, I thought I was coming down with Alzheimer’s.” Doctor Roberts then putting Aline on Anxiety and Depression Medicine and had sent us to see Maureen Linsennier a Mental Health Counselor in St. Albans to see if she could identify what was causing Aline’s problem.  Aline was having difficulty making decisions to do things, for example; when going to bed, instead of laying between the sheets she would lay between the sheet and the blanket then I started opening up the sheets ready for her before she went to bed or would say, “I don’t know what to cook anymore?” Well, we haven’t had Meat Loaf for a while and she would say, “O. K. I’ll make some” also when the timer would go off on the oven she would just stare at it not knowing what to push to stop the timer or tying her shoes, sometimes she was able to and other times she couldn’t and answering the phone, she knew someone had called but couldn’t remember who they were or what they wanted then having to use star 69 to find out who had called, then getting a phone with caller ID so I would know who had called Aline would always save our change when we went out and would wrap it up and bring it back to the bank after accumulating enough; one day when Aline had brought her change to the bank, she was not coming back out and when she finally did, asking her what took so long? Well the teller had noticed that the rolls were not filled right having to recount it all over again, after that day we would wrap the coins up together. When going into church I would see her looking back and forth walking up the Aisle and could not decide which pew to sit in. Aline had kept a diary “Journal” for many years on the happenings of each day and on November 9, 2008 after All Saints Church Tabernacle in Richford was vandalized couldn’t consume writing this information in her diary and had asked me to do it for her as I have done to this day and will continue to do so; as I looked back in her diary seeing less and less being written each day and her writing had changed in the past several months especially towards the end and her writing was not the way it used to be in prior years, then there were other times she would just start crying and I would ask her; “Why she was crying for?” telling me, “I don’t know, I don’t know.”

I remember one day while we were at Hannaford’s in St Albans, Aline wanted to go to the restroom and after bringing her there she kept coming back out telling me there was no place for her to go in there; after a while one of the girls at the cash noticed we were having problems and had come to see if she could help and had brought Aline in to help her. After that day scouting around finding restrooms that I was able to go into with her either in Enosburg, St. Albans, and Burlington or wherever we were that either men or woman could use and I could lock the door after entering; but most places having individual restrooms for men or woman that I could not do this with her. These are only few examples of things happening.

Then as time went on things worsened and Aline became more confused and more crying still seeing Maureen Linsennier the Mental Health Counselor and on December 7, 2009 Dr. Amy Robert had sent Aline to see Dr. Pendlebury an Alzheimer’s specialist in Burlington and seeing him again on December 15thputting Aline on Seroquel instead of the medicine that Dr. Roberts had recommended but the Seroquel that did not agree with her at all then on December 18th Dr. Pendlebury changed her Seroquel medicine to Risperidone then on December 21st seeing Dr. Pendlebury again and on our way home that day Aline had a very bad spell tugging at her clothes having a fit and trying to open the car door as we were traveling and we just could not reason with her, good thing Claire was with me stopping at the Hospital in St. Albans to calm her down on our way by. While we were at Dr. Pendlebury office that day they had Aline go in the office first by herself then, they had me go in with her and at the end of the visit they had talked to me alone and Aline had the impression that we were ganging up on her and we were going to put her in a Nursing Home as I assured her that I would never do that to her and we were all there to help her; again on December 23rd calling Dr. Pendlebury telling him that things were not going very well and Dr. Pendlebury had doubled her Risperidone Medicine.

Aline cannot be left alone anymore and is very lost when she doesn’t see me around always wondering where I am and is still having these bad spells that she is very restless and uncontrollable, sometimes when we went out at the beginning I had to stop beside the road or in a parking lot somewhere to walk these spells off until they went away now at home having these spells when we slept very little some nights and also having these spells during the day when she becomes very restless and would just pace around the house mostly in the kitchen nonstop. There was a while at the beginning that I would have her sit on the porch while I was mowing the lawns and I would wave to her as I passed by and she would wave back to me, but that did not last very long as she would go walking down the road and I would watch her very closely and when she got where I wouldn’t see her anymore, I would take the car and go get her asking if she wanted a ride and she would get in and I would bring her back home but the first thing I knew she was back down the road again. One day as she was walking I could not see her anymore and found she had fallen in the ditch for some reason and could not get up by herself, she had not been there very long when I found her; luckily she did not get hurt. Then as time went on pacing around in the house almost nonstop all day and at times was talking to herself often about her baby or would have very bad dreams at night. I had to keep all the doors locked at all times so she would not go out and get lost and many nights she would not sleep and paced around in the bedroom that I had taken the doorknob off the door and I would go sleep on the couch or should I say tried to sleep on the couch getting very little sleep many nights. During the day pacing around most all day and Aline would see these bad people at times that were real to her and was really scared of them as I would open and slam the door and tell her they were gone, I threw them out, there gone now, everything is going to be fine and she would calm down for a while. The last time that Aline went out to any outing was at Nathan and Brandi’s wedding on September25, 2010. Aline really wanted to go to their wedding as Nathan was our first Grandchild and has always been very close to her being also our Godchild. Everything went fairly well that day having Andre and Donna following us and the wedding was held at St. Mary Star of the Sea Catholic Church in Newport and going to the reception at Eastside afterwards then coming back home early in the evening shortly after the meal. Aline gave it all she had and was so glad to be at their wedding that day; even then Aline was not able to dress herself and do things on her own very well, as I had to dress her and get her ready for this day but was still eating fairly well by herself.

Sometimes I tell myself, that you’re not really gone. I feel you’re tender touch and no longer feel alone. I see us walking hand in hand like we use to do. It’s hard for me to accept.....That your life on earth is through. There were so many dreams we had not yet fulfilled all the hopes of the future that we were going to build. All our friends and family have been so very kind; they try hard to ease my broken heart and my troubled mind. But how can my heart be mended, when it has broken in two? Part of my heart is still on earth, the other part left with you. It is hard to see tomorrow, when I can’t accept today, because the “Love of My Life” has been taken away. I will always miss you, Sweetheart, time will not erase the pain, all the raw emotions of losing you, words will never explain. I will cling to the warm feelings you brought into my life, maybe somehow it will ease my confusion and emotional strife. Someday we will be rejoined in Heaven up above, but while I’m still on earth; I will cherish every memory of our precious love. Somehow those precious memories will have to carry me through, until the time comes for us to walk hand in hand for an eternity......together.......me and you.