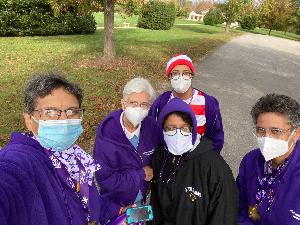 Alzheimer’s disease is relentless -- but so are we!

The newly-enlarged James Thompson Twins team (now there are SIX of us) are walking in specific memory of James Alfred Thompson -- Nicole's and Andrea's father, Ariel's, Maris', and Sophia's grandfather, and Gladys' husband -- whom we lost to Alzheimer's Disease on 8 May 2010.

We also acknowledge the loss of our grandfather and my mother's father, Denver Flood, to the same terrible disease, nearly three decades before.

Daddy was an exemplary man -- loving, kind, responsible, funny, gentle, honest, and full of faith in God.  He was absolutely the best husband, father and grandfather anyone could ask for.  He was also a dedicated Postal Worker and a gifted Sunday School teacher.  Sadly, though, all the things that made him the wonderful and unique person that he was, slowly vanished amidst the fog that characterizes Alzheimer's disease.  We hated to see him suffer the losses, fears, and indignities associated with Alzheimer's.  We also hated the toll it took on my mother, who faithfully cared for him throughout his illness.  We were inspired to walk, in his memory (in their memories), to work toward the goal of ending such suffering for everyone, one day in the future.