Make a general donation to the 2021 Walk to End Alzheimer's - Weber/Davis, UT

Ken is fundraising to honor 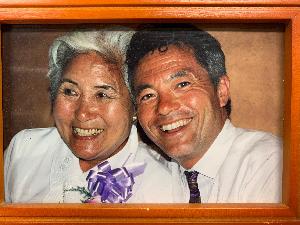 My mother Leona Nakamura Barfield was the youngest of five children born to Japanese immigrants to the US. She was raised in southeastern Colorado and after her father passed away, her mother was concerned about providing for the two daughters. They traveled as US citizens back to family in Japan in 1940. When anti-Japanese sentiment arose in the US, they began their return trip home. Sadly, the last ship departed Tokyo without them, but it was turned away in Los Angeles, and unbelievably, she spent WWII stuck in Japan. She learned Japanese, attended school and was forced to work silently in support of the Japanese war effort. After the war she and her sister worked for the US Civil Service in Tokyo, where she met my father, an Army lieutenant. They returned to the US, were married and she bore 4 children in 5 years. After a divorce, she never re-married and lived alone in San Francisco for nearly 20 years. Diagnosed with Alzheimer's, we moved her to central California to be cared for by my sister for nearly 10 years. In 2015, she came to live in a memory care facility in Park City, where she quietly passed away in October, 2018, robbed of her memory.