Make a general donation to the 2021 Walk to End Alzheimer's - San Antonio, TX 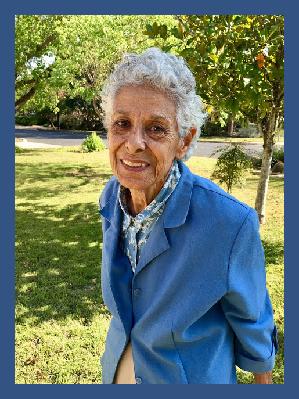 About 7 years ago, we noticed greeting cards from my Grandmother began arriving late. I mention this because my Grandmother had the innate ability to get greetings cards in the hands of the recipient, to the day of said occasion, like magic. From there we noticed other things like mixing up loved ones names, and changes to her perfect penmanship. She began cooking less, and when she did cook, the famous dishes she prepared, tasted a little different. Her frequent drives from Boerne to San Antonio became much less frequent because she was confused and flustered with the 30 mile trip. Soon she stopped cooking entirely and her once immaculately clean home became cluttered. Dressing also became a challenge for her. Unable to judge seasonally appropriate clothes, something one would never think about, became impossible for her. It seemed like this went on for a few years before she began to progress with more concerning effects of the disease. It took about 6 years before my once totally independent Grandmother was no longer able to care for herself. Eating less, balance issues and falling were starting to occur. She became childlike which to me, was a blessing of this illness.

In her last year, I spent lots of time taking care of my Grandmother, almost as if she was my baby. We laughed and had many adventures. I took her for haircuts and walks. We drank chocolate milkshakes at the park at watched the ducks. I held her hand at family gatherings because social situations now made her uncomfortable. All the things that once made her the strong woman she was, had faded.

She may not have known who I was most of the time, but she knew she was safe and loved. She still loved to be outside raking leaves, cleaning her plants, and of course be in the kitchen. We had to remove sharp items and keep a close eye on her while she was in the kitchen. The stove had to be disconnected in order to keep her safe.

Once she began falling and wandering from home, it became clear that she would need more help than what we as a family could do to keep her safe. The difficult decision was made that she would now need to be in a Memory Care Facility. Timing couldn't have been worse with Covid-19 which basically meant we would not be seeing my Grandmother for possibly many months. Well loved by staff, she received the nickname, "Dora the Explorer," because she was always on the move. The staff all told me how sweet and caring she was and how she loved to smile. It was a blessing that she remained loving all throughout her disease.

There was not a person that met Dora that didn't feel the love and grace she exuded. Her smile was bright and contagious. She always had an angelic presence about her.

On the afternoon of September 3rd 2020, Dora's battle with Alzheimer's ended. It is because of the strength my Grandmother possessed in life, that will enable our family to persevere through this difficult time.

I remember taking walks with my Grandmother as a child to look at wildflowers. Bluebonnets were always her favorite. I walk for Dora's Bluebonnets.