Make a general donation to the 2021 Walk to End Alzheimer's - Fort Worth, TX 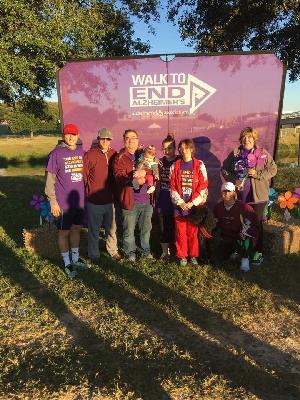 Our Family is Ready to Walk Again!

Our family walks because ending Alzheimer's is so important to us. We are The E Team because Lisa's grandmother, Enon King, died from Alzheimer's in 1995 after a battle against Alzheimer's  that lasted over 12 years. The other "E" is Tim's stepfather, Earl Mock. Earl became a part of our family in 1995 right after we lost Enon. He was the only grandfather on Tim's side the kids knew and we all loved him dearly. We lost Earl in 2017 after battling Alzheimer's for over five years. Unfortunately, we are still battling Alzheimer's related dementia in our family. This horrible disease is now taking Lisa's mother and our grandmother, Susie Holmes, from us. Another "E" we honor is Tim's mom, Eva Mock, who is now in a memory care facility suffering from dementia. We are walking in the Fort Worth Walk on October 30th at Panther Island Pavilion. We would love for you to join us!