Jan is fundraising to honor 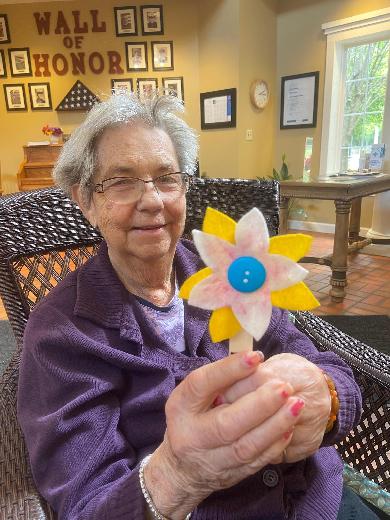 It has been 13+ years since we first noticed that Mom was repeating herself. She was officially diagnosed with Alzheimer's in January 2014. People age 65 and older survive an average of four to eight years after a diagnosis of Alzheimer’s dementia, yet some live as long as 20 years. This reflects the slow, uncertain progression of the disease.

Mom is now in a locked Alzheimer's/Demetia only facility close to my sister Jean in MN. It is very small with approximately 50 residents. Mom will be able to stay here until the end of life. She continues to decline and has assistance with activities of daily living. Mom still enjoys wearing bracelets, having her nails painted and sitting outside. We have been extremely pleased with the care Mom is receiving. This was definitely the right move for Mom and our family.

This will be the 8th year the Forget Me Not Team will be involved with the Katy Walk to End Alzheimer's. Over the past 7 years the Forget Me Not Team has raised $50,365. More than 6 million American families are facing this crippling, progressive disease which cannot be prevented, cured or slowed. An estimated 6.2 million Americans age 65 and older are living with Alzheimer's disease in 2021 and as many as 14 million will have the disease by 2050. Seventy-two percent are 75 and older. One in nine people 65 and older (11.3%) has Alzheimer’s. Almost two-thirds of Americans with Alzheimer's disease are women. In 2021, Alzheimer's and other dementias will cost the nation $355 billion. The cost of caring for those with Alzheimer's and other dementias is estimated to rise as high as $1.1 trillion (in 2021 dollars) by 2050. 1 in 3 seniors dies each year with Alzheimer's or another dementia. Between 2000 and 2019 deaths from Alzheimer’s have increased 145%.

I continue my commitment to fight this disease. I need your support to do my part. Please consider supporting my efforts by joining the Forget Me Not Team and/or with a donation to fight this incurable disease and help the Alzheimer's Association advance research into methods of treatment, prevention and, ultimately, a cure for Alzheimer's. This event raises awareness and funds for Alzheimer's research, care, education and support in communities nationwide.

Thank you for joining the movement! The end of Alzheimer's disease starts with you!

Forget Me Not
Join My Team

View: Forget Me Not
Join My Team