Leslie is fundraising to honor 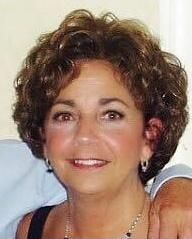 As many of you know, my beautiful mother lost her battle with Lewy Body Dementia 3 and a half years ago at the age of 68.  Lewy Body Disease is basically Alzheimer's and Parkinson's rolled into one.  She was an amazing mother.  Adoring wife.  She lived for her grandchildren.  She loved life.  She was gentle and kind, smart and HILARIOUS.  She could light up any room.  But over the last 10 years, we had to sit by and watch her slowly deteriorate ... see that light dim.  We had to "learn to get used to the new Mema," as Emma would say... until she finally became unrecognizable.  Not just in her appearance... but in her spirit.. it was gone... well before her body finally gave up.  I miss her every. single. day.

Please consider walking with me or supporting my team through a donation... Researchers are making progress, but that progress can't continue without the generosity of people like you... Together, let's end Alzheimer's disease!! -Leslie