Linda is fundraising to honor 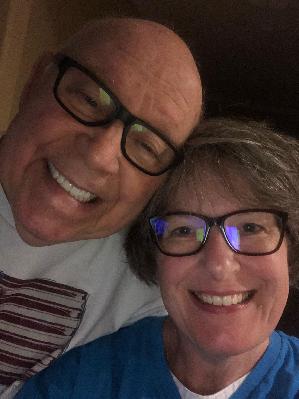 The Alzheimer’s Association has been a great source of information for me.  You see a few years ago my husband of 30 years, Jim, was diagnosed with early onset Alzheimer’s disease.  When I hear about early diagnosis of any disease I always want to know what caused the individual to seek out medical care.  For us, I began to see changes in Jim’s behavior.  Jim was this super outgoing individual who made friends easily.  I started to notice him withdrawing from social situations.  At first I didn’t think much about it, thought maybe he was just tired of going to the golf course, but then it was the horseshoe pits too.  And all the sudden I realized he wasn’t going out at all.  He’s retired, he should be out having fun, right?  That’s what I thought!  When he started to withdraw from doing things with me, is when I realized the list of things he wasn’t doing was really adding up.  I started paying close attention, and realized he wasn’t leaving the house for several days at a time.  This was really not NORMAL.  I asked Jim if there was a reason he wasn’t running around anymore.  He’d make up some excuse that always included wanting to be with me and I’ll admit that I accepted the excuses.  It’s sweet, right? He wants to be with me.  Jim has some other health problems, and so once the “love spell” he’d cast on me passed, I honestly thought he was experiencing anxiety related to his heart or digestive issues.  Then when the days turned into weeks without leaving the house I spoke to Jim again about my concerns about how much he was staying at home.  Also during this time, there’d been a couple times that Jim would look at me with a blank expression, you know what that is, right?  I don’t know how else to explain it, a childlike expression of complete confusion.  These were short episodes.  Prior to all this I’d find things in odd spots or not find them at all – but didn’t really think it was a “thing”.  I mean doesn’t everyone put the milk on top of the fridge every time they get in the fridge?  Okay, maybe not every time, but often enough that it moved from funny, to annoying, to troublesome. Jim had a doctor’s appointment coming up, and I asked if I could go with him to share my concerns.  At that appointment, I mentioned to the doctor what was happening.  The doctor performed a basic assessment on Jim, and then referred us to a neurologist.  To make a long story short, the Neurologist first did a cognitive assessment, very similar to what is done during our Underwriting process.  He then ordered several medical tests.  At our next appointment we learned the diagnosis, early onset Alzheimer’s disease.

We’re now several years in to this diagnosis and I’m happy to report that progression is slow.  This year Jim has stopped driving and we made the decision to move back to our hometown.  We’re now close to family. What a blessing this has been!  With the crazy housing market we opted to move to an apartment.  I was comfortable with the location change, but was concerned that being in an apartment complex might be too much change for Jim.  It’s really turned out to be easy living.  No lawn, no appliances to replace, no snow to scoop.

I have faith that God is in control and will help us manage each step of the way.  The medication, brain games and with God’s grace I pray that we have many years before this disease progresses beyond isolation, anxiety, forgetfulness and confusion.  I’m still working to find ways to get Jim out of the apartment, being close to family is helpful. I’m determined to fight back against this disease that’s stealing my husband from me.

Please consider making a donation to advance the care, support and research efforts of the Alzheimer's Association. Thanks to all who have donated in the past and thanks to those that keep us in your prayers.  Together, we can end Alzheimer's disease.