Make a general donation to the 2021 Walk to End Alzheimer's - Charleston, SC

Lillian is fundraising to honor 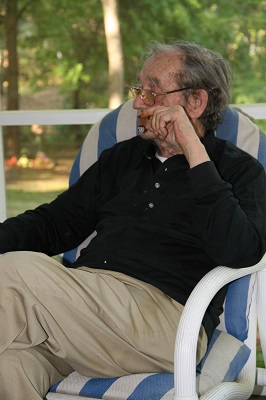 Mail-in donation
On June 17, 2016, we lost Pop to Alzheimer's.  It has been five years now, but all that happened during his seven-year battle with this disease is still very fresh.  People just associate memory loss with Alzheimer’s, but it is SO much more than that.  Alzheimer’s disease is a degenerative brain disease and the most common cause of dementia.  The characteristic symptoms of dementia are difficulties with memory, language, problem-solving, and other cognitive skills that affect a person’s ability to perform everyday activities such as eating, taking a shower, walking, and swallowing.  Pop had a total change in personality and did not want to leave the safety of his favorite chair.  He didn’t want to eat dinner with the family because he was embarrassed that he had forgotten how to eat.  People in the final stages of the disease are bed-bound and require around-the-clock care. Alzheimer’s disease is ultimately fatal.  Mom’s life as the caregiver totally changed also.  Since taking care of Pop consumed her life, she ignored medical problems that were going on with her.  After Pop passed away, mom could no longer ignore her own health, and we almost lost her to Cancer!  As Pop’s Girls, Angie and I are participating in the Alzheimer’s Association Walk to End Alzheimer’s in Pop’s memory.  More than 6 million Americans of all ages are living with this disease.  The FIRST SURVIVOR of Alzheimer's is out there, but we won't get there without YOU!  Please make a donation in Pop’s memory and all the other people nationwide to help the Alzheimer’s Association advance research into treatment, prevention, and ultimately, a CURE.  Thank you for joining the movement!