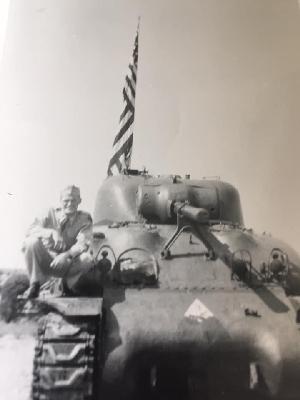 Pie on his tank in the Korean War.

My grandfather was one of the most important people to me in the world.  He was a hero not just because he was the best grandfather in the world but because he served our country in the US Army in the Korean War.  After the Korean War he went on to serve the City of Philadelphia in the police department for 33 years.  While he would rather tell you about the two babies that he delivered, he handled some of the worst cases imaginable.

If that wasn't enough he became a US Marshal after retirement from the police department once again serving his country.

We call my grandfather Pie.  It is a long story but almost everyone who knows him calls him that.  He was diagnosed with Alzheimer's on March 16, 2021, and lost his battle on June 12, 2021.  I am motivated by my grandfather's legacy as a warrior for his country, we will be warriors in the fight against Alzheimer's.  I want to help other families with resources on how to find support for themselves and their loved one with the disease as well as finally find a cure.  Please join us in this fight!