Frances is fundraising to honor 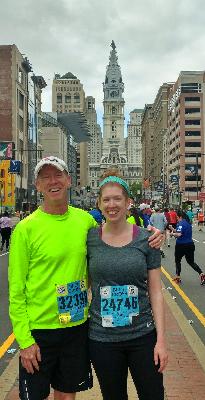 In the mid-2000s, my Dad, John, took up running after having spent some time raising a family. His goal was to complete the Broad Street Run and he did so for more than 10 years. I eventually joined him during races. He may have beaten me the first time but now admits that I became the faster one between the two of us. We ran our final Broad Street Run together in 2017, the year he was diagnosed with Early-Onset Alzheimer's. It was a cold, wet morning but that didn't matter so much to me, knowing in the back of my mind that he this could be our last race together. At the time he was beginning to show difficulties with depth perception and balance and for safety reasons gave up running shortly after.

Instead of walk, my Dad and I would go on walks around the neighborhood. On November 13th our walk won't just be for us but for those with Alzheimer's disease because we are participating in the Alzheimer's Association Walk to End Alzheimer's®. Currently, more than 5 million Americans have Alzheimer's and that number is expected to grow to as many as 14 million by 2050. Our future is at risk unless we can find a way to change the course of this disease.