Make a general donation to the 2021 Walk to End Alzheimer's - Rehoboth Beach, DE 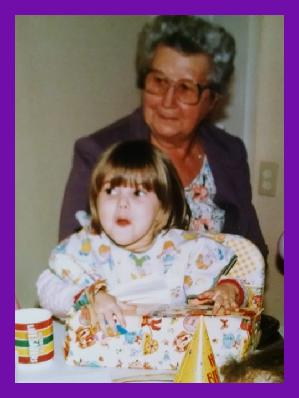 As a teen, while I sat with my great grandmother, she called my by her sisters name. My great grandmother was in her late 80's, her sister had passed. I didn't quite understand it then, but this is a memory that sticks with me 21 years later. My great grandmother was my first best friend. I would go and stay the night with her so often. I would dress up in her clothes, wear her make up, eat all of her pickles and looked forward to burnt bacon for breakfast. Thinking about that makes me laugh, I was little, and everything she did was amazing. She would play school with me and always be the student. She would let me watch "my shows' on TV and never complained.

As she aged, she was no longer able to live on her own and moved in with my grandparents. I was 16 when I went to "watch" her one day when my grandparents had to go out. She was quiet, not as I remembered her from my childhood, whether anyone knew it or not, she was feisty, said what she wanted (when she was with me anyway), but had the biggest heart. One thing that remained was the same warm smile that she always had.

I lost my great grandmother, my first best friend, because of the effects of ALZ. The changes in behavior, the loss of awareness and thought processes that had always protected her diminished. She became vulnerable to her own body and I lost her in a way that I don't feel was fair.

Death is never fair. Death is imminent, but in my mind, especially at 16, she should have had a peaceful passing. If it weren't for the ALZ, while the outcome would have been the same, it would have been easier to accept her passing.

This is why I walk.