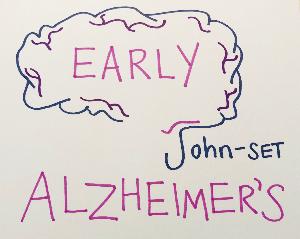 John and his wife, Susan, spent Valentine's Day 2017 on a rather unromantic date: in a doctor's office receiving a diagnosis of Early-Onset Alzheimer's. John was 58.

Prior to his diagnosis, John had a medical career. He started as a helicopter flight nurse and emergency room manager progressing to a hospital IT professional. Outside of work, John was an avid runner who participated in the Philadelphia Broad Street Run for over 10 years. He achieved success professionally and athletically however John's greatest accomplishment would be his family-life. He supported Susan in creating and running community outreach programs at the hospital where she works as a nurse. As his children grew up, John spent weekends at the local middle school helping build sets for his daughter's drama club productions or coaching his son in soccer.

The diagnosis of Alzheimer's completely altered life for John and his family as it does for all families living with the disease. Support our team for the Alzheimer's Association Walk to End Alzheimer's®, the world’s largest event to raise awareness and funds for Alzheimer’s care, support and research. The first person to survive Alzheimer's is out there; help up find them!