Make a general donation to the 2021 Walk to End Alzheimer's - Tulsa, OK 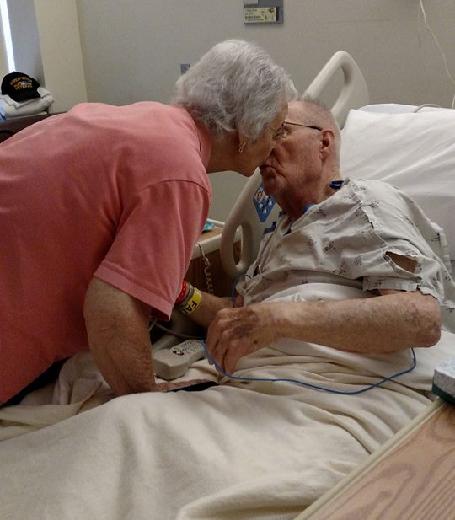 Team page of We're ALZ in

I created this fundraiser in loving memory of my grandpa, Billy Jack Austin. He left us on December 21st, 2017. He was a loving grandpa to ten, father to five, and husband to Shelia Yvonne Austin for 64 years. Growing up, my grandpa taught me so many things but I will always remember singing the Cops theme song "Bad Boys" over and over like a broken record and standing on his toes while dancing in their sun room, to German music. As he aged, he started having medical issues which caused several visits to the ER and to rehabilitation centers. Where, of course, he always made new friends and quickly became the staffs favorite patient with all his war stories and off colored jokes.

The doctors believed that a lot of his health issues were caused by Agent Orange which he was exposed to during his 20 years serving in the Army. As the years went on, we started to notice early signs of dementia which only contributed to get worse with time. Towards the end of his time with us, when I would visit him, there were times he wouldn't remember who I was or would confuse me with other family members. After his last hospital trip, he was taken to Forest Hills here in Broken Arrow. He was not able to make the necessary improvements to remain at their facility and was taken to PAM, Post Acute Medical Specialty Hospital of Tulsa. While at PAM his heath quickly declined. I received a call December 20th, 2017 from my uncle advising that the staff had called him and said grandpa's O2 stats had dropped significantly, my heart dropped. I know this was "the call". I knew we didn't have much time left with him and I rushed to the hospital to ensure him he was not alone. I held his hand, I sang "Bad Boys" and "chew tobacco" to him, let him know how much we all loved and cared about him and that we would take care of grandma. As hard as it was, knowing that he could go at any time.. I also knew he was ready. He would no longer be in pain or suffering and he will always be with us in our hearts and memories. We made the necessary phone calls to family and at 06:51 the morning of December 21st, 2017 he passed, surrounded by family and loved ones. I also created this fundraiser in support of my grandma, Shelia Yvonne Austin. Since grandpas passing, she has been diagnosed with the early stages of Alzheimer's which only seems to be progressively getting worse with time. I went to visit with her yesterday and we had the same conversation several times. I was showing her pictures of my dogs, vacations and family members. She asked me several times "now, who is this?" and it would be me that she was asking about. While I was there the guys that take care of her lawn showed up. As she was writing them a check, she said "it is so hard to sign Mrs, Shelia Austin" when I asked her what she meant by that she responded "I have signed my checks for 64 years as Mrs. Billy Jack Austin, and now he is gone" and that absolutely broke my heart. She followed up that comment with a sweet story of a memory she had of her and my grandpa. As much as it hurts me to see my grandma struggle with these moments.. it also shows me that even though she struggles with her memory, her love for my grandpa was and is still so strong she is able to recall the sweetest of moments between the two of them. Together, we can end Alzheimer's disease. Please make a donation to advance the care, support and research efforts of the Alzheimer's Assoication. Every little bit counts!