Make a general donation to the 2021 Walk to End Alzheimer's - Bergen-Passaic, NJ 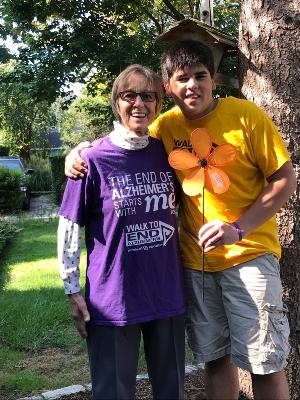 My grandmother, who has dementia, with me after last year's walk.

Ever since I was little, my grandmother and I were inseparable. Many of my earliest memories are of her and I playing with my massive Thomas the Train Engine Set, feeding the birds at the river, or of us just being together and laughing.  But when I was in the second grade, things started to change and I didn’t understand why. My grandmother would repeat the same questions over and over again, she didn’t seem to remember a lot of words, she would lose things around the house, and she was always worried and anxious. For the longest time, I didn’t understand what was happening to her, why she was acting this way, the words Dementia and Alzheimer’s weren’t words I had heard before. And now, as her dementia has continued to advance for more than ten years, she no longer is herself. She doesn’t laugh the way she used to. She isn’t able to speak coherently, stammering out a few words and sounds at a time. She can’t do the most basic things on her own, even going to the bathroom.

Please join me in the fight for Alzheimer’s first survivor by joining my team in the Walk to End Alzheimer’s or making a tax-deductible donation.

Together- we can #endalz!