Make a general donation to the 2021 Walk to End Alzheimer's - Lincoln, NE 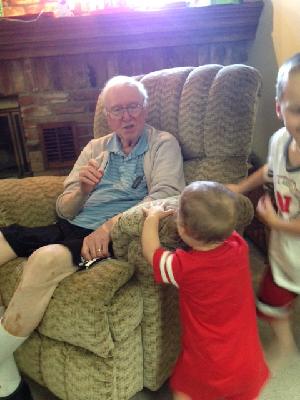 Dad talking to his Grandson!

The Floth Team is walking in loving memory of Stanley Floth - husband, father, grandfather, brother, uncle, friend. He died on May 24, 2016, following 7 1/2 years with dementia-Alzheimer's challenges.

He was an ordained minister of the Lutheran Church ELCA. Stanley missed his 50th ordination anniversary, June 2, by 10 days. He loved the Lord, church, and his family. Stanley was very proud of his 4 children and their accomplishments.

The 5 grandchildren were 'his buddies' and the 'apple of his eye.'  In the earlier years reading books, singing songs, & playing ball were activities enjoyed with the grandchildren.

Stanley loved music, reading, history, WW II, trains, Route 66, John Wayne, & listening to old time radio programs.  He had quite a library of cassette tapes, VCR tapes, books, & magazines covering these areas.  He enjoyed whatever sports team & Nascar driver the kids had as their favorite. Or he might go for the other team just to cause some excitement.

Even though he enjoyed people there was no place like home with family.  We enjoyed the Lincoln Municipal Band concerts in the park during the summer & car rides talking about the country side scenery.