Make a general donation to the 2021 Walk to End Alzheimer's - Triangle (Raleigh-Durham), NC

Margaret is fundraising to honor 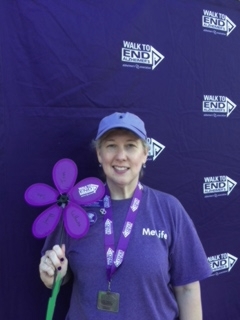 Attending the 2017 Triangle Walk to End Alzheimer's. A purple flower is for someone who has lost a loved one to the disease.

Since 2007 I have been participating in the Walk to End Alzheimer's. I continue to walk in honor of my Mother, Joan Millett, who had Alzheimer's for six years; my Father, John Millett, who was her primary caregiver; and my siblings, Daniel and Catherine Millett who provided support to our parents when I lived far from MA.

When you donate to the Walk, your fundraising dollars fuel the Alzheimer's mission, and your participation in the event helps to change the level of Alzheimer's awareness in your community.

As the Board Chair of the Eastern North Carolina Alzheimer's Association Chapter I am able to see first-hand the amazing work the staff and volunteers provide to this part of the state.

Please join me in the fight for a world without Alzheimer's disease. #endalz