Make a general donation to the 2021 Walk to End Alzheimer's - Jackson, MS

Jim is fundraising to honor

Janie and my Dad. 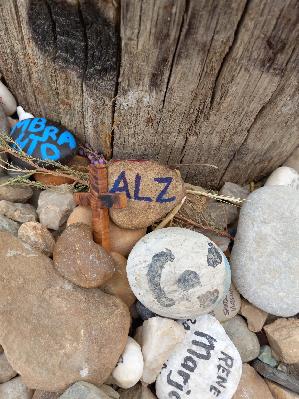 2021 has been a special year for me.  Good friends invited me to join them as a fellow pilgrim (peregrino) on the Camino de Santiago in Spain.  Through much of August and September we made our way from the south of France, into Spain, and across the northern portion of Spain ending our pilgrimage 480 miles later in Santiago.  What a great adventure!

One of the highlights of the Camino is bringing a stone from home to deposit at the Cruz de Ferro (iron cross) on one of the highest points of our Camino route.  The stone represents a burden the peregrino wishes to discard & leave behind.

Due to an injury while on Camino I wasn't sure I'd even make it to the Cruz.  But prior to my injury a fellow peregrino had given me the small wooden cross representing determination.  It inspired me to find a way to make it to the Cruz, deposit my stone/burden, and eventually on to the finish in Santiago several days later.

I'm hoping in some small way this will inspire those struggling with the burden of Alzheimer's Disease or other types of dementia.

I'm leading the way to Alzheimer's first survivor by participating in the Alzheimer's Association Walk to End Alzheimer's. Currently, more than 5 million Americans have Alzheimer's and that number is expected to grow to as many as 14 million by 2050. Our future is at risk unless we can find a way to change the course of this disease.

p.s. November 9 update: My injured leg has healed enough to ditch the crutches!