Adrienne is fundraising to honor 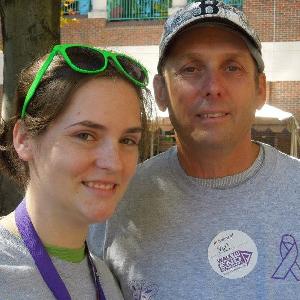 Mail-in donation
In the fall of 2008, we got the news that my father Joel was diagnosed with early-onset Alzheimer’s disease. I remember him saying at the time, “This is not a death sentence.” We had no idea how wrong he was and how naïve we all were. I knew from his mother (my grandmother) having Alzheimer’s that it was not going to be an easy road but had no idea the extent of it. Over the next decade, we would watch my dad struggle with moments of depression, anger, aggression, multiple illnesses like pneumonia - all connected to his Alzheimer’s diagnosis. We slowly watched him decline more and more as time passed by. In 2014 he was placed into a long-term care facility where he remained for 4.5 years.

Even though part of me feels like I started losing my dad 10 years ago when he was diagnosed, we said our final goodbye to him in December of 2018. After 10 long years of dealing with early-onset Alzheimer’s, my dad decided he didn’t want to fight anymore. It’s a day I knew would come and one that I thought I would be more prepared for, but I quickly learned nothing could've prepared me for his loss. Some days it feels like he’s been gone an eternity, and other days it feels like it just happened yesterday. I miss the dad he was to me before he was sick but I would also do anything to have even the sick version of him back.

2020 marks the 2nd year my family will walk with our purple flowers representing that we have lost someone to Alzheimer’s. Losing someone to this disease is like grieving someone for a second time. And though I am glad to know he is no longer suffering and I find some peace in that, I am still having a hard time doing life without him. My dad was the greatest man to ever live. I wish my husband Andy had gotten to know him more before he got sick. I wish my future kids would know their grandfather. I miss my weekly visits with him at St Pats and still struggle every Sunday, knowing I won't be visiting him there anymore. Not a day goes by that I don’t think of him and all the memories that our family will miss out on after losing him at such a young age.

Through the last few years I have been fortunate enough to serve as Walk Chair for 3 years, Congressman Kennedy's Ambassador, and a top fundraising team year after year. Now I have traded in my volunteer hat and have become an employee of the Alzheimer's Association, fighting this disease every single day. But none of these things are going to bring my dad back. However, my hope is that through all of this, I can fundraise as much money as possible and be a part of providing some support and connection to families experiencing Alzheimer’s. And of course to hopefully fund research and be a part of a movement that one day leads to a cure. When he died, a small part of me found peace knowing his struggle was over. But I think I kept waiting for a relief to wash over me and for the weight to be lifted. But that feeling never came. I hope that by getting involved again in fundraising for a cure that I’ll find that feeling. That relief will hopefully come in knowing I can still make a difference in the lives of others so that no other family has to be torn apart by Alzheimer’s. I’ll find relief when we #EndAlz. So even though it’s harder now, I know need to keep up the fight. I have met so many brilliant lights throughout the darkness of Alzheimer’s. Friends from my support group, friends from my advocacy work, friends from the Alzheimer’s Walk committee, long lost friends who I have reunited with after they learned about my dads passing. Giving back to an organization that has given so much to me is truly an honor.

One thing I learned from my dad is to never give up. My dad proved time and time again that he was not a quitter. He fought this battle long and hard right up until the very end. I am going to take a page out of his book and keep up the fight to send Alzheimer’s once and for all. It will be hard at times, but I know he would want me to keep walking, Fundraising, and fighting for a cure in his honor and memory. But I can’t do it alone. Now, more than ever, I need your help. I hope you’ll join us! Every year gets a little more emotional. I am a firm believer in 'strength in numbers' - the more teammates we have, the stronger we will be for each other. You can walk with us this fall or donate, but sharing our page does just as much. It helps us get closer to a world without Alzheimer's. The first SURVIVOR of Alzheimer's. I know a cure is going to come one day for this disease that affects millions across the country. It's too late for my dad, but maybe not too late for us.

Thank you all for taking the time to read this! Your donations mean so much, but your love and support throughout this journey mean so much more.

Dad - I hope you are eating all the ice cream and Funny Bones you want, drinking beer with all those who left this world before you, listening to The Who on repeat, and living life to the fullest again. I miss you every day. This is for you.
View More
Join My Team Donate Now

Every Mile a Memory
Join My Team

View: Every Mile a Memory
Join My Team