Make a general donation to the 2021 Walk to End Alzheimer's - Heartland, IN (Muncie/Anderson)

Stacey is fundraising to honor

her mom, aunt, and uncle. 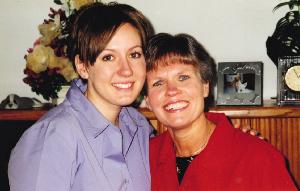 In December 2001, my 51-year-old mother began showing signs of dementia and was diagnosed with a rare, degenerative brain disorder called Creutzfeldt-Jakob Disease, or CJD . Doctors compared the disease to Alzheimer's, but instead of progressing over many years, CJD progresses quite rapidly. After 7 months in a long-term care facility, my mom passed away in August 2002.

In 2017, my aunt passed away from the same disease, and just last November, my uncle also passed from CJD. It has taken a devastating toll on our family. To honor the memories of my mom, aunt, and uncle, I am participating in the Walk to End Alzheimer's this year.

I'm hopeful that we can end Alzheimer's disease, CJD, and other forms of dementia Please make a donation to advance the care, support and research efforts of the Alzheimer's Association.