Make a general donation to the 2021 Walk to End Alzheimer's - Indianapolis, IN

The family of Arnie Richard is fundraising to honor 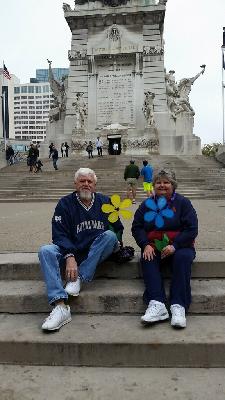 John Arnold "Arnie" Richard, 77, of Noblesville, IN, died peacefully on March 14, 2021. Arnie was born in Plymouth, IN on April 19, 1943, the son of the late Arthur and Agnes Finney Richard. He was a 1961 graduate of Central Catholic High School in Lafayette and earned a degree in Mathematics from Purdue University in 1965.

Arnie fondly remembered time spent stationed in Puerto Rico while serving in the Navy. Following his service, he began a thirty-three year career at Delco (Delphi) Electronics as a Statistical Forecaster.

Arnie married Rosemary (Zimmerer) Richard in Kokomo and they celebrated their 50th wedding anniversary last August.  Arnie was passionate about his four children, Eric, Paul, Amy (Krupa) and Adam and played an active, supportive role throughout their lives. Keeping up with his seven grandchildren was a source of great happiness. Arnie loved competitive games, solving puzzles, researching genealogy, following sports and sharing the country with his family through travel. He enjoyed trips to the beach, mushroom hunting, and never declined a slice of peach pie.  Arnie was a loving provider who had a gentle demeanor and a soft smile.

He was preceded in death by brothers, Robert Richard and Roland (Marjorie) Richard; his parents; and three brothers-in-law.

In lieu of flowers, donations can be made to the Alzheimer's Association.