Make a general donation to the 2021 Walk to End Alzheimer's - Champaign/Urbana, IL

Emilie is fundraising to honor

my mother, Debbie, and her dad, Papa. 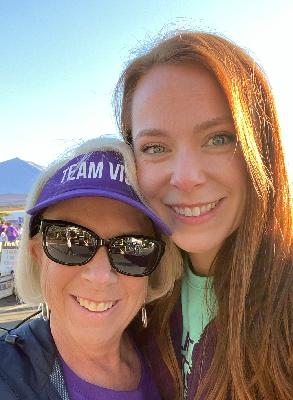 Mom is incredible, despite the diagnosis. She participated in the Engage + Emerge program in Southwest Florida until the Biogen study was shut down. Despite the re-emergence of the study, her Alzheimer's has progressed to a place where she can no longer enter the study. Despite this, she hopes her time contributed positively to finding a cure for Alzheimer's. She's pretty quiet these days, but her demeanor is calm and kind, just like the Debbie we all know and love.

My volunteer efforts look different this year as we made the move from California to Illinois. For 3 years, I was the Co-Chair of the East Bay Walk to End Alzheimer's, I was a member of the Alzheimer's Congressional Team for DeSaulnier and my social media campaign, @TalktoEndAlz was very active. I even participated in The Monthly Dose podcast. Now, I plan on taking more of a backseat approach as I will able to see mom more now that we're closer when the pandemic restrictions lift. I still plan on fighting when and where I can to end this terrible disease.

I'm asking for your support. This disease is heartbreaking. So many families are affected and so few receive help because they can't afford it. In October, I'll be walking in a new location this year, Illinois, with friends and family in the Alzheimer's Association Walk to End Alzheimer's.

Currently, more than 5 million Americans have Alzheimer's and that number is expected to grow to as many as 16 million by 2050. Our future is at risk unless we can find a way to change the course of this disease.The end of Alzheimer's disease starts with all of us. Please make a donation to help the Alzheimer's Association advance research into methods of treatment, prevention and, ultimately, a cure.