Sara is fundraising to honor 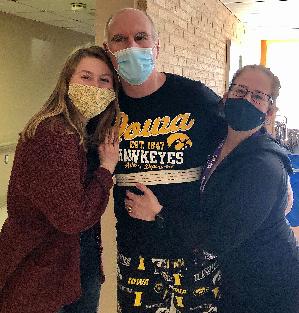 Dale with Maddie and me soon after Aase Haugen opened up last spring after more than a year closed due to COVID-19.

My husband, Dale, was diagnosed with early-onset dementia several years ago. In the years since his diagnosis, I, along with other family members and friends, have supported him as his dementia gradually robbed him of his ability to make sounds decisions, participate in conversations and family gatherings, ride a bike, walk unassisted, dress himself, and otherwise live as any human would wish to live. By participating in the Alzheimer’s Association Walk to End Alzheimer’s, I’m raising funds and awareness to advance the fight against this disease —funds that allow the Alzheimer’s Association accelerate critical research to end dementia and support those who are fighting dementia and their caregivers.

Together, we can end Alzheimer's and all other dementias (including Lewy body dementia, Dale's diagnosis). Thank you for supporting this cause!