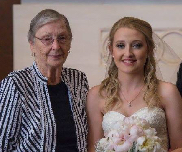 When I was younger, and would hear of Alzheimer’s or dementia, I just thought it was something that most people developed with old age. It was just being forgetful. I never would have imagined that “forgetfulness” could be so drastic as not remembering your children’s names, birthdays, or the fact that they had visited you, or that you had just spoken to them five minutes before. My grandmother was diagnosed with Alzheimer’s in August of 2015 and since then we have slowly watched her disappear. She has gone from living independently, to living with her children, to living in a memory care facility, and then losing her life to Alzheimer’s. It is hard to watch someone you love fade away without any ability to stop it, or slow it down.  I walk to fight Alzheimer’s because my grandmother cannot fight it herself. I walk because I want to raise awareness to the devastating truth of Alzheimer’s.  I walk because I don’t want other families to experience what my family has faced. I walk because I don’t want this to be experienced by future generations of my family.  It is not just forgetting a name or a place, but it is forgetting yourself.
Last year on November 15 Nana (Polly) lost her fight to Alzheimer’s. Being honest I felt like I had failed. I thought “if only I had raised more money” “if only I had been more dedicated to fundraising” maybe she would have made it through. I was mad at myself and others for not doing enough. For a little while I felt like giving up and ending Polly’s Pack because I didn’t know if it was doing any good. I felt like I had let her down.
Then the date for this year’s Walk to End Alzheimer’s was changed. In previous years the walk has been held the last Sunday in September when it is precisely 1000 degrees outside. The committee made the decision to move it later in the year when temperatures are a little more comfortable. The date they chose happened to be November 15, 2020. I don’t feel this date is a coincidence in anyway. To me, this was the reassurance that I needed that we ARE making a difference. I feel it was Nana’s way of letting me know that she is proud of what we are doing and that she is still here with us.
Nana did not lose to Alzheimer’s. She won. She’s not here with us anymore, but she’s exactly where she wants to be. She won.
We will keep on fighting Alzheimer’s. We will keep raising money. One day there will be a cure.
One day there WILL be a white flower.