Kaara is fundraising to honor 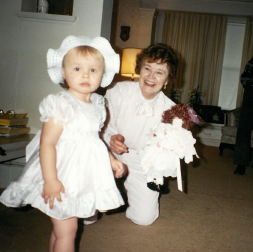 My grandmother Pauline was a trailblazer. Not only did she earn her Bachelor's Degree circa 1950, but she also earned her Master's Degree in Education in the early 50's. She was part of the first class of women to graduate from Clark University. She was smart as a whip. I remember she devoured books. She had an extensive private collection of books as well as a public library membership. She'd go to the library every week to rent 2-3 new books and would finish them within a week! A feminist ahead of her time, she told my grandfather she'd only marry him if he learned to cook and do the dishes.

She survived some terrifying events including a house fire, the Worcester tornado, and her 35 year-old son dying of cancer. Still, she was a compassionate as the day was long. She'd find something to compliment everyone on and was honestly one of the nicest humans I've ever known. She came to ALL of my musicals and concerts, up until 2 years before she passed. She wrote me letters when I was a freshman in college, which was around the time she was diagnosed with Alzheimer's.

For nine years my grandmother battled Alzheimer's. It's a miracle she never descended into the final stage and that she survived that long with it. She remembered us all when she passed. I remember her asking me to sing for her because she dearly loved singing but could not carry a tune. Her favorite song was Edelweiss... as is mine. I sang it for her funeral.

Watching someone SO intelligent and educated slowly lose their mind was maddening. I pray that in the next ten years, we find the cure to Alzheimer's.