Blake is fundraising to honor 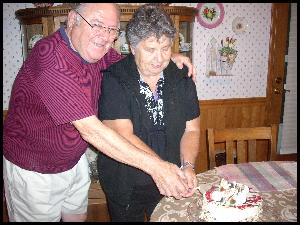 Mail-in donation
True love is a sacred flame that burns eternally. And none can dim its special glow. Or change its destiny. True love speaks in tender tones and hears with gentle ear. True love gives with open heart and true love conquers fear. True love makes no harsh demands. It neither rules nor binds. And true love holds with gentle hands the hearts that it entwines.

Pat was the 2nd of 4 children born to Clifford Wayne Gordon and Sadie Lillian Elkins Gordon. Pat played basketball and football. They called him "Flash Gordon". Pat Gordon graduated at Sumner High School, Class of 1947. He served in the United States Air Force.

Barbara was the 5th of 6 children born to William "Dick" Thomas Matthews and Fairy Oleva Anthony Matthews. She grew up in a logging camp. Barb graduated at Sumner High School, Class of 1949.

After two years of courtship and a two day engagement, Pat and Barb tie the knot on August 12, 1959. Barbara worked at Fibreboard for 13 years. Pat worked at grocery stores since he was a young lad. Pat was a partnered at Thriftway first.

In 1964, Pat and Barb purchased a store in Olympia. Barb continued to work Fibreboard while Pat commuted to Olympia from Sumner for a year. They named the store, "Pat's Market". After a year of Pat commuting, they found a house in Olympia on the water to rent and they moved. They referred to it as "Mr. Letter's house". In 1969, they then owned their first house in Olympia. Waterfront property too! Then in 1972, Pat and Barb built their dream home on the water. In 1994 they moved back to their hometown area to help take care of their moms. They had vacation homes through the years as well.

Pat was a smart man. The Seattle Seahawks became a part of our lives in 1976 when we became charter season ticket owners. Pat and Barb were there for the first game in the Kingdome and the last. The tickets, passed down to Brad Kelly, their son in law. They will forever be addressed to Pat Gordon. He'll live forever! A third generation was at that last Kingdome game.

Pat and Barb sent their daughter to college for education....she came home with a boyfriend. Brad Kelly, future son in law. Pat allowed the marriage....though if you ask him if Brad is still on probation, he'll probably respond with a yes. Brad and Debbie were married in October of 1986. Pat had told Brad, "you can pay for her gas now."

Pat and Barb had been waiting for this news.....first grandchild! Blair, born November 3, 1989!

What will Pat and Barb do in their spare time? They love on their first grandchild and second! Second and last grandchild, Blake born on February 16, 1993.

My papa, Pat, he's a silly one. He's had quite the adventures in life. I was lucky enough to go on many trips with him. He was always happy to hold my baby dolls and play dress up. Even if that meant to put on a feathered scarf or purple/pink princess hat. My sister and I are lucky to have such a "silly papa".

When did you find out papa had Alzheimer's? Barb- Late into 2010

When did you suspect papa had Alzheimer's? Barb- 2010. Debbie- When he answered the phone and end up buying items that were unnecessary. Bills weren't getting paid and check book was off.

How did you feel when you found out about him having Alzheimer's? Barb- I was devastated with the news. I didn't know how to move forward. Debbie- Extremely sad.

How do you feel about it now? Barb- Never got angry about it. Miss what we once had. Just like simple hug or talking. We don't have discussions like we use to. As far as looking forward, I don't. Enjoy the moments you have with him even when he's not lucid. Debbie- Angry. Nice guys shouldn't get it. It's mean.

What's of your favorite memories of papa? Barb- His wit. What a gentleman he always was.

What do you want for the future of ALZ in general? Barb- To have them find a cure or the real cause. Debbie- how to stop it.

What have you learned from him and ALZ? Barb- Learn to go along with them. Never correct them. Not to say remember. Patience. Lot of patience and lot of love. Debbie- how cruel the disease is.

On Monday, January 13, 2020 at 5:38pm Pat an Barb became great grandparents to a baby boy. Blair their older granddaughter and grand son in-law named their son Axel Joseph. Pat was thrilled to hear he was a great grandpa.

On Thursday, January 16, 2020 at about 4:30pm Rollin "Pat" Wayne Gordon passed away peacefully. Alzheimer's did take his life. Two days prior Pat had woken up different breathing pattern, unresponsive, and moaning/groaning in pain. We called the paramedics and checked him out. We decided as a family it was best for him to go to the hospital. We knew there wasn't much they could do for him besides making him comfortable. Debbie & Barb stayed with him. He had visitors up until he left this world. He is the best Papa, Dad, Husband, Father in-law, brother, son, friend you could ask for. We will miss you. You will never be forgotten.
We love you Papa

This is why I raise money and awareness.

Please help to put an End to ALZ