Make a general donation to the 2020 Walk to End Alzheimer's - Kennewick, WA (Tri-Cities)

Kyle is fundraising to honor 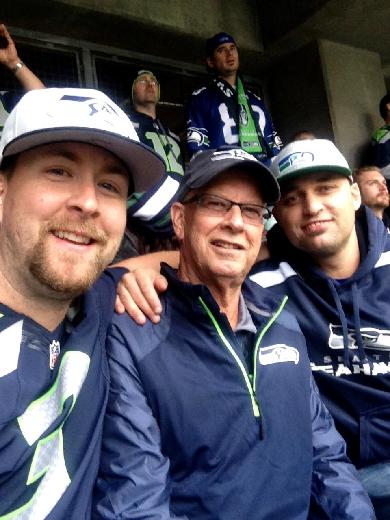 My Dad recently lost his battle to Alzheimer’s last summer.  Although he's been gone for more over a year, I still keep him close to my heart   Not a day goes by when I don’t think about him.  There were so many fond memories  that I will cherish forever and hold close to my heart.  Saying goodbye to someone is hard.  Having to do it twice with my Dad is without a doubt, the hardest thing I’ve ever had to do.  What I wouldn’t do to see my Dad one last time, hear his contagious laugh and tell him how much I truly loved him.  He was a great man and I hope that one day, a cure for this awful disease will be found.

As a lot of you may or may not know, my Dad was diagnosed with a very rare form of Alzheimer's called Posterior Cortical Atrophy (PCA), also called Benson's syndrome, is a form of dementia which is usually considered an atypical variant of Alzheimer's.  The disease causes atrophy of the posterior part of the cerebral cortex, resulting in the progressive disruption of complex visual processing.

People can be diagnosed with PCA at a young age (as early as 55). PCA affects the visual processing part of the brain which results in the person eventually going blind. Plus it also includes all the other symptoms and complications that go along with Alzheimers. When my Dad first became ill, it became apparent that he was not going to get any better. I became an emotional mess with feelings of helplessness, guilt and sorrow. I began to regret every bad thing I ever said and the many times we butted heads. I can't count how many times I've wished that I could just go back to when my Dad was still healthy and tell him that I love him. I often find myself wondering if he knows how great of a father he has been to my sister and I, as well as a loving husband to my Mom. I may not be able to change my Dad's diagnosis or future, but I want to help all those just like him who are still fighting and provide awareness for those who have yet to be diagnosed.

The past 8 years has been a very sad and trying road for my family and I truly appreciate all the love and support we've received from family, friends and my Dad's caregivers.

I walk for my Dad and everyone who has ever had to experience the effects of all forms of Alzheimer's and Dementia. I walk to raise money and support for the funding of research in hopes of one day finding a cure. Together I know we can make a difference!

We walk 4 Gary
Join My Team