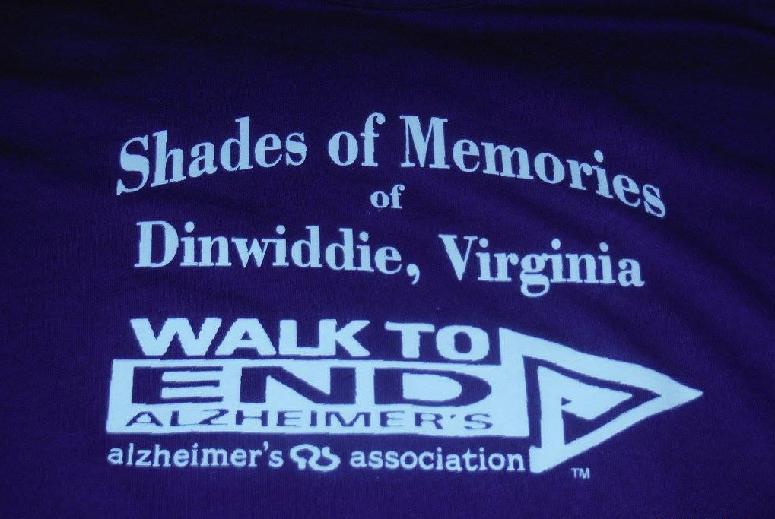 GENERATIONS UNITE IN CARSON ON MISSION TO END ALZHEIMER’S

CARSON – The Harvell Ball Field in Carson was alive with activity and laughs Saturday, but it wasn’t for the usual sporting fare that is a fixture of the rural baseball park. Instead, the field served as a rallying point for generations of men and women as they all united with one goal in mind: to pursuing a day where Alzheimer’s Disease and dementia no longer have a grip of the lives of millions around the world.

Last Saturday, the family and friends of the late Nola Harvell gathered at the ballpark in her honor for their second annual Alzheimer’s awareness walk as they not only walked laps around the field and raised funds for the Alzheimer’s Association, but also sought to bring attention to a disease that has robbed millions of their precious memories, while turning mothers, daughters, sisters, and brothers into caregivers.

Attendees release balloons prior to the walk, with each shade representing a promise everyone in attendance is making in their fight against Alzheimer’s. (Michael Campbell)

When it came to raising awareness, it was hard to overlook the staggering statistics that are associated with “The Silent Killer,” some of which were relayed to attendees at last week’s walk, such as the fact that nearly six million Americans are suffering from the debilitating disease or some other form of dementia, or that Alzheimer’s is the sixth leading cause of death in the United States, killing more people than breast and prostate cancer put together.

The most telling statistic of all – the estimation that the number of people living with Alzheimer’s or dementia is expected to reach 14 million people by 2050 – served to not only convey the seriousness of the disease to those at last Saturday’s walk, but also as their line in the sand to do their part to prevent that statistic from coming to fruition.

The second annual walk was hosted by the Shades of Memories of Dinwiddie, Virginia team, led by Mildred Woodhouse and her daughter Sandy Barrett. Following the success of last year’s walk, efforts began almost immediately to put on a follow-up event this year, held on the property Woodhouse’s mother and family owned for decades, a traditional rural backdrop that Harvell loved and enjoyed even in her final years. Last Saturday, as her mother’s home stood just over the fence line of the ball field, Woodhouse, Barrett and Harvell’s surviving sisters, brothers, and friends gathered to do their part to bring about a cure and end to Alzheimer’s Disease.

Mildred Woodhouse and Sandy Barrett couldn’t help but smile as they honor their mother and grandmother Nola Harvell during this year’s walk, only a short walk from her home behind the Harvell Ball Field. (Michael Campbell)

“The energy here for this cause is simply awesome,” Barrett said as attendees “Stepped Out For Nola B,” walking laps around the ballfield the longtime Carson resident would care for, known for regularly checking the meters at the Harvell Ball Field over the years, one of the ways she said active as she got older.

“So many people had the opportunity to meet her over the years,” Barrett continued, reflecting on her grandmother’s rich and abundant life of service to her church and community, having driven buses for Dinwiddie Schools for over 30 years and a member of Little Zion Baptist Church where she worked as a Sunday School Teacher and clerk.

“We all have a vision of helping people in our community so we can combat this disease,” she said. “Hopefully next year, we will have an even better turnout but today, the energy couldn’t be any more amazing than it is right now. This is like a family reunion for us.”

Leading up to the walk, words of encouragement to those suffering with the disease and their caregivers, the sometimes unsung heroes of the fight to end Alzheimer’s, served to provide hope that a cure for this disease that can affect people from all walks of life could be on the horizon before a special balloon release was held at center field, each color representing a promise everyone made at last week’s event.

As the balloons rose into the air about the ball field, some couldn’t help but look over at Harvell’s family home, knowing she would be watching the event from her porch if she was still alive today.

Since the beginning of this event, one of the goals of it was to spark the conversation about Alzheimer’s and dementia in the community and, over the last year, more people have reached out to Woodhouse to offer their support for, not only, the event, but as they care for their relatives or friends with the disease.

“My mother Betty Pegram was diagnosed at age 43 so we are about nine years in,” Petersburg resident Tonya Prince shared. “So we are her caregivers so we like to talk about it and bring awareness to this.”

Nola Harvell’s sisters were all on hand for the walk at the Harvell Ball Field, joined by relative and Petersburg Sheriff Vanessa Crawford. (Michael Campbell)

Prince added while they all share a familial bond, being able to talk about all their own experiences as caregivers can help ease the stress that can come along with helping take care of an Alzheimer’s sufferer.

“We are all family but, we also all know how it feels to be that caregiver,” Prince remarked. “The love, the exhaustion, so we can talk to each other and console one another when we need it.”

Lawn chairs, music, and smiles were not in short supply Saturday as the event saw many people from across the community and along the Eastern Seaboard come out to support the cause and “Step out for Nola B,” harkening back to family gatherings at Harvell’s home nearby.

“Sometimes, we might have 40 or 50 people inside her house for Christmas Day,” Harvell’s daughter Mildred Woodhouse reflected. “My mom was the oldest of the family and they all came out to see her on Christmas Day so, this is just bringing us together even more. While we may all be living in different places, today is the day we come back, that’s what being family and friends is all about.”

Despite the warm weather, attendees were all smiles as they completed their laps around the Harvell Ball Field during last week’s Alzheimer’s walk. (Michael Campbell)

As another successful walk concluded, organizers said they were moved by the support received so far and are excited for what the future holds.

“Thank you so much for taking the time out of your busy schedules to come and walk with us, to help us raise funds, to raise awareness to this awful disease,” Barrett said. “We hope that the one white balloon that we let go to today is that sign for us to find a cure for Alzheimer’s and all other types of dementia.”

“We are going to throw out those statistics,” Woodhouse said enthusiastically. “We are all going to work together and because we are family and we’re all in this together.”

To learn more about the Shades of Memories of Dinwiddie, Virginia team, visit their page at http://act.alz.org/goto/steppingforNolaB or contact Mildred Harvell Woodhouse at 301-661-4605 or email her at mildredwoodhouse@gmail.com.