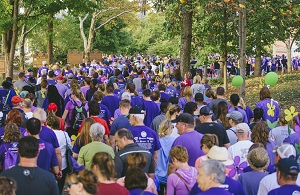 I am co-chairman of the Summit County Alzheimer's Walk on August 22nd. It is a fund raiser and it is for a great cause.  As all of you know, I know more about this than I wish to know.  This letter is sent to ask you for whatever you might think appropriate for this cause.  If you don't donate a sou, that is completely OK.  Just consider the following information.  It is something I put together.  Also, I have much more so if you are interested in more facts, just let me know.

The stages of Alzheimer dementia begin with Mild Cognitive Impairment, to Mild Dementia to Moderate Dementia to Advanced Dementia.  There is no precise definition of when one reaches one level or another.  Initially, Alzheimer Disease really is not severe because the afflicted person can pretty much participate in normal activities.  However, it progresses to impaired memory, language and problem solving and other factors.  When it reaches the advanced stage the person cannot dress or bathe, is incontinent, usually requires assistance eating, cannot communicate and is incoherent. The person is disoriented as to environment, time, other people and self and finally easily becomes agitated, disinhibited and frequently has disturbed sleep patterns.  The patient also becomes weak physically, loses coordination and balance and is vulnerable to falling.  Mary has all of these traits and is now in a long term care facility from which she will never emerge.   These are clinical and impersonal descriptions.

The true personal, emotional tragedy occurs when you see a formerly vibrant person descend into oblivion.  It typically takes years for the progression to occur.  I think probably an average is five to seven years from mild stage dementia to advanced stage dementia.   In Mary's case it was about eight years from the mild cognitive impairment to Mild Dementia diagnosed in 2012 to Advanced Dementia now.

Impact on our society and country

Just to briefly address the severity and impact of this disease on our society, there are an estimated 5.5 million Alzheimer victims being looked after by about 15 million care givers right now.  The estimated cost of this is $260 billion annually.  What is worse is that with the aging of the baby boomers the disease is predicted to affect over 60,000,000 people in about 20 years, either directly with the Alzheimer patient, or indirectly with the care givers and cost society generally about $1.1 Trillion dollars annually.

Bottom line, it is almost impossible to overstate the negative impact of Alzheimer Disease. When one speaks of 60,000,000 people we  are talking about almost 20% of our population.  Alzheimer Disease is a major issue now and it is inexorably becoming worse going forward, unless we find a cure.