Janie is fundraising to honor 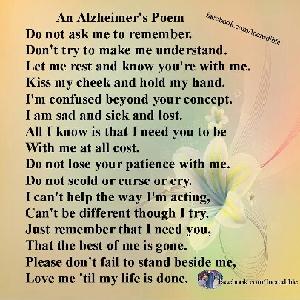 I'm walking to help reclaim the future for millions. By participating in the 2015 Alzheimer's Association Walk to End Alzheimer's™, I'm committed to raising awareness and funds for Alzheimer research, care and support. We are Lopez Legacy and fundraising is an honor.

In Dec, 2007, I heard the word Alzheimer's for the first time. I researched and was shocked that my dad, Archie had been plagued by this disease. A year later, it was my mom, Tomasa. I thought, how can this be? They are devout in their religion and their lives. Alzheimer's doesn't discriminate. As a family, my children started educating themselves, and we came up on the Walk To End Alzheimer's website. We formed a team of 7 in 2011 and slowly, we began to build team members and began fundraising. It has been the most gratifying time to be in a position to help persons with Alzheimer's. My mom passed away in Feb, 2017 of complications due to this awful disease.

Currently, more than 5 million Americans have Alzheimer's which includes my parents and that number is expected to grow to as many as 16 million by 2050. Our future is at risk unless we can find a way to change the course of this disease.

I need your support to do my part! Please make a donation to help the Alzheimer's Association advance research into prevention, treatments and a cure for Alzheimer's. For the millions already affected by the disease, the Association offers care, education, support and resources in communities nationwide. Lopez Legacy will walk proudly and in unison on October 28, 2017.