Make a general donation to the 2020 Walk to End Alzheimer's - Beaumont--Southeast Texas, TX

Jean is fundraising to honor 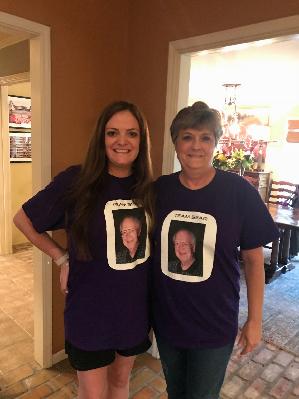 This year I will virtually walk in memory of Jack "Bear" Eisenberg and Podsy, fathers of Lee Mann and Leann Ewing, who suffered and lost their battle with Alzheimers.  Although it breaks my heart,  I will also being walk in memory of Wayne Marvin who lost his battle with this terrible disease this summer. I am sure everyone has someone or knows someone that has been affected by Alzheimer's as more than 5 million Americans are living with the disease.  There are more than 16 million caregivers of people living with Alzheimer's and other dementias in the United States.  Alzheimer's disease is the sixth-leading cause of death in the United States.  These statistics are staggering. Together let us try to put an end to Alzeimer's disease.  Please make a donation, no amount is too small, to advance the care, support and research efforts of the Alzheimer's Association.  My heart is with everyone who is affected by Alzheimer's or any demenita disease and I will continue to help find a cure.