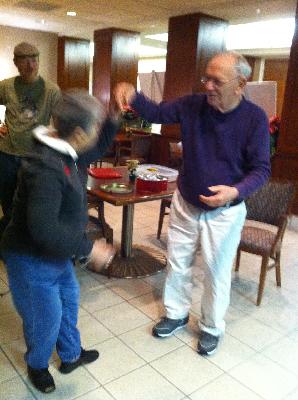 Support our team for the Alzheimer's Association Walk to End Alzheimer's®, the world’s largest event to raise awareness and funds for Alzheimer’s care, support and research.  My Grammie was diagnosed with dementia when she was in her early 90's.  She and my Pop were married for more than 72 years before he died.  After her diagnosis, she got to where she could no longer live at home and once she moved into a nursing home, she no longer remembered us.  We didn't recognize my Dad's early symptoms as those of Alzheimer's or dementia.  Once he was diagnosed, my mother was his anchor at home for several years.  We were fortunate that they lived in Ft. Worth and my Mom found the James West Center where she was able to take him for day stays before he was finally admitted after Christmas several years ago.  His cognition deteriorated rapidly after admission as he no longer had his anchor.  He was there for 3 years before he died - not knowing any of us, unable to communicate or do anything for himself.  It was so hard to watch this strong, brilliant man disappear into the disease.  We really lost him twice - once when he no longer knew us and again when he died.   I would love to see this disease eradicated so others would not have to go through what we and what he went through.  Thank you for your support in helping to make this happen.