Make a general donation to the 2020 Walk to End Alzheimer's - Memphis, TN 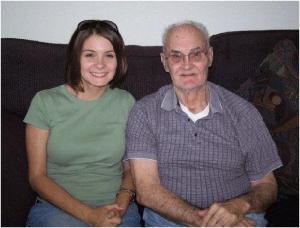 As you know, I am very passionate about the Alzheimer's Association. I would like to share with you what drew me to the Alzheimer's Association. His name was Ed Cecil.  When I was in college, Grandpa was diagnosed with Alzheimer's. At the time of his diagnosis my family and I were not very educated on the disease. Information about the disease was not as readily available as it is now. We knew it was a memory loss disease, but that's all we really knew.

Alzheimer's was not a topic of conversation with my circle of friends. I'm ashamed to admit it now, but I was embarrassed to talk to my friends about my grandpa's diagnosis. I was worried they would think he was crazy. I didn't want my friends thinking less of this great man. Obviously, something changed or you would not be reading this today.

I'll never forget the moment that everything changed for me, the moment that I understood and vowed to do something about this horrible disease. It was in August 2003. My family, some family friends, and I all went to St. Louis for a Cardinals game. Grandpa was the second biggest Cardinals fan I'd ever met, second only to his mom. We thought it would be a great treat for him to see the Cardinals while he could, hopefully, still enjoy it. At one point during the game, he looked at me and asked, "What is this game called again?" That moment broke my heart. This wonderful man, who loved baseball, who loved the Cardinals even more, who helped make all of our family Cardinal fans, who had once cherished his Stan Musial jersey hanging on his wall...this man no longer remembered what the game he so loved was called.

Obviously, from that day in August 2003 till he passed away in March 2011, my grandpa's health continued to decline. Looking back on it, that day at Busch Stadium was not a bad day in comparison to others we've dealt with since then. But that day was the catalyst. Since that day, I have never stopped trying to end Alzheimer's. I am no longer embarrassed to talk about the disease...instead I tell everyone I know and also those I don't know about Alzheimer's.

Please consider making a donation to the Alzheimer's Association. The end of Alzheimer's disease starts here!