Make a general donation to the 2020 Walk to End Alzheimer's - Tulsa, OK

Stacy is fundraising to honor 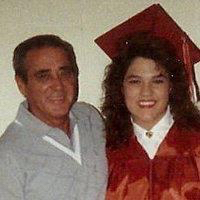 Why I walk.. the ugliness of Alzheimer’s

About a week before my grandpap passed away he was being evicted from the Claremore VA Memory Unit. The doctor told me they had no choice, he had become “a threat to the safety of other patients.” My grandpap was found fashioning “weapons” out of plastic utensils. Just another of many “antics” that can be attributed to his Alzheimer’s.

They intended to transport him to the OKC VA Hospital for evaluation, medication changes, etc before placement in another VA hospital (maybe Talahina)

Sadly, during transport he suffered a stroke. As I arrived at the hospital expecting to discuss his combative behaviors, I was given the news that he was not expected to make it through the night. My ornery, stubborn grandpap was now unresponsive.

He was placed in a private room as we waited for the inevitable.

One afternoon, I looked over at him and he seemed to be looking straight at me. I say “Pap, can you hear me?” He nodded yes. “Do you know who I am?”  Another nod, yes. I immediately called for nursing, and continued to talk to him as he continued to nod in reply. I was informed that this moment of responsiveness can occur just before “the end.” I made as many phone calls as I could to family so they could talk to him. The moment ended as quickly as it began, less than an hour. Pap’s vitals continued to decline. The next day I was watching tv at his bedside when something got my attention. I looked over at my grandpap just as he took his last breath.

These memories are why I walk!

I walk for others struggling with this disease. I walk for families who care for and watch their loved one’s battle! I walk for the Alzheimer’s Association: they were there for Pap and I, providing valuable tools, resources, and much needed support!

I walk in Memory of my grandpap!