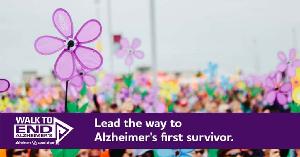 The different colored flowers represents those lost to the disease, those fighting it right now, caregivers, and general supporters of the Alzheimer's cause. White flowers will one day represent Alzheimer's survivors.

By participating in the 2020 Alzheimer's Association Walk to End Alzheimer's™, we're committed to raising awareness and funds for dementia research, care and support.

Currently, 5.8 million Americans have Alzheimer's -- the most expensive and feared disease in the nation. Each of our futures is at risk for this disease that affects more people than breast cancer and prostate cancer combined. We must act now to stop the devastation.