Make a general donation to the 2020 Walk to End Alzheimer's - Kirtland, OH 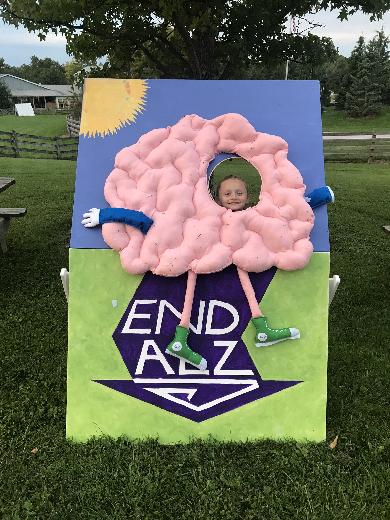 Mail-in donation
I’m joining this walk to support the ones I love who cannot fight for themselves. I have taken care of people with Alzheimer’s and Demntia for years. I worked at an assisting living home in the lock down unit for 3 years; I have been an aide for 11 years.

It has helped me understand Alzheimer’s a lot more. Prepared me to care for my residents and now patients. Taken classes, tests, and researched everything during my time working there. Nothing, and I mean NOTHING, prepares you for when it happens to your own grandma. My Nonna started writing checks for 1971 when my mother noticed it was happening. Then her physical illness stopped her from being able to live independently (CHF). We had to put her in a home. I still remember the day I walked in and she didn’t know who I was. To say i was crushed would be an understatement. My Nonna who baked me my own special apple pies because I would cut the apples, the one who would listen to Dean Martin in the kitchen, and the one i stayed the night with after my nonno died. I cried the whole way home.

Then years later; my fathers mother called me and told me congratulations on becoming a mother. She asked how far along I was and a few more questions before we got off the phone together. A week later my grandma called again and had the same conversation with me. My world crashed!!!! Not only did I have one grandma with Alzheimer, my other grandma had mini strokes and has dementia! The grandma who always played scrabble, card games, who just would drive my sisters and i around town, and remember all the fun stories of her childhood could no longer remember anything and soon not be able to remember us.

UPDATE: MY Nonna will be turning 92 this month and is still in the nursing home. She is strong and stubborn as always. My grandma Nancy is living in an assisting living home down in VA with my aunt. She recently got to video chat with me right after i had my second child last year. It hurts more with my grandma Nancy since she isn't as close as my other grandma is. I can't just drive 20 minutes away to see her. Once again i will be walking for both of them though. i

We're ALZ in
Join My Team