Make a general donation to the 2020 Walk to End Alzheimer's - Manhattan, NY 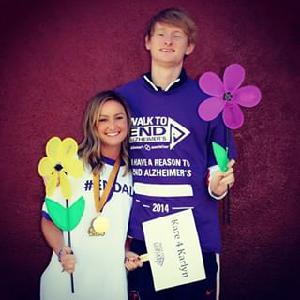 Karlyn was a strong woman. She never backed down from a challenge. She was a fighter until the very end, just ask the friends and family who supported her through her 10+ year fight with early onset Alzheimer's. There is this misconception that Alzheimer's only afflicts those in their late 70s and 80s. Sadly, there are those that experience Alzheimer's as early as their 30s.

On March 7, 2019, as the clock approached midnight, Karlyn slipped into a deep sleep and never awoke. She was tired of fighting this terrible disease and tired of suffering. She is survived, however, by her two wonderful adult children, Bethany and Preston. Bethany constantly talks about how active Karlyn was in the community. How giving she was to others, and how much she enjoyed staying involved. Preston talks about how his mom always made sure, to the best of anyone's ability, that he stayed on the straight and narrow and actually did his homework.

Karlyn was involved in Junior League, spent 20+ years as a nurse, and president of the cheer booster club. She was loyal, steadfast, and reliable. When her parents fell ill, she was there to ease their pain and suffering. She was truly happy and fulfilled in her work as a nurse and inspired both her children to find meaning in their own lives. Her legacy will live on in them.

Karlyn was a daughter, a wife, a mother, a friend, and a Christian. She will be missed dearly by those whose lives she touched, especially her kids. Please support Karlyn's Krew as they continue the fight against Alzheimer's.