Make a general donation to the 2020 Walk to End Alzheimer's - Omaha, NE

The memory of Mary Myers. 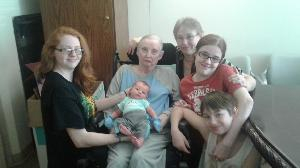 My wife Mary lost her battle with Dementia on March 29, 2018.  She is now free and at peace with our Lord and once again whole in body and mind. She was diagnosed with early onset Dementia in 2004.  In May of 2014 I had no choice but to place her in a care facility where she received the level of  care I could no longer provide.

Unfortunately there is no cure for this cruel and relentless disease at this time.  We must be just as relentless in this battle to find a cure, and one day we will prevail.  Alzheimer's has reached the crisis stage in America and is now considered the #1 health issue we are facing.  More people die from Alzheimer's than from breast cancer and prostate cancer combined.

My Family & I will be walking in the Omaha Walk to End Alzheimer's on October 3, 2020 in memory and honor of Mary and all who are dealing with Alzheimer's/Dementia.  This disease robs one of not only their memory and cognitive functions, but eventually their dignity as well.  As I do my part, would you please support me and Team MARY'S MUNCHKINS with a donation.

My dream is that not only will a cure be found, but ultimately a means of prevention that will keep my grandchildren and great grandchildren from having to deal with it.

Thank you for joining the movement! The end of Alzheimer's starts with you.