Make a general donation to the 2020 Walk to End Alzheimer's - Charlotte, NC 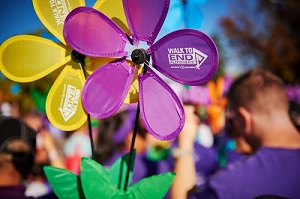 She always had a song in her heart. As a young woman, she would travel to radio stations and sing as part of a trio of gals. As life often does, dreams of stardom were replaced by a bustling house of kids and a husband with a loud boisterous laugh.  But there was rarely a time that she wasn't singing some tune as she went about her day.  To her, Patsy Cline hung the moon. Knowing every word to every song, my grandmother would accompany Patsy, in absolute perfect harmony.

Alzheimer's began to rob my grandmother of all she held dear, far too early. And as a teenager, I experienced the reality of caregiving far too early in life. As a young girl, the memory of my Grandma John standing scared and shaking in the shower after I helped her bathe is seared into my soul.

The further the disease progressed, the more of her we lost. First it was her sense of direction, then it was our names, and eventually she no longer recognized this world. But one thing remained. A simple press of the button on the radio not only welcomed Patsy back into the room, but instinctively, my grandmother would once again join her in perfect harmony.

Together, we can end Alzheimer's disease.