Make a general donation to the 2020 Walk to End Alzheimer's - Charlotte, NC

Nikki is fundraising to honor 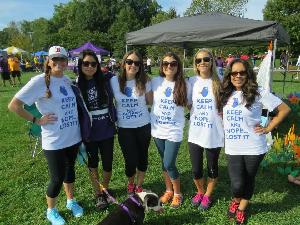 I'm joining the fight against Alzheimer's disease, the nation's sixth-leading cause of death, by participating in the Walk to End Alzheimer's again this fall and I need your support. The Alzheimer's Association Walk to End Alzheimer's® is the world's largest event to raise awareness and funds for Alzheimer's care, support and research.
This year will be the eighth year that we will participate in the Charlotte Walk to End Alzheimer’s. Our team, Just Keep Swimming, was named in reference to the movie Finding Nemo. For those of you who have not seen the movie, one of the main characters, Dory, suffers from memory loss. She says, “When life gets you down do you wanna know what you’ve got to do? Just Keep Swimming. Just Keep Swimming.” We wanted our team name to be light and funny since we we're walking for such a heavy cause. I am honored and humbled by the outpouring of support from family, friends & colleagues who join our fight to end Alzheimer’s each year. Since 2013, with your help, our team has raised $110,885!! We would appreciate your donations in support of our team and our goal of ending Alzheimer’s. Every penny makes a difference!
Thank you for joining the movement and for your generosity. The end of Alzheimer's disease starts with you.