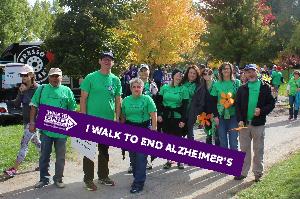 Under the leadership of John Beuerlein, the firm set three inspired and innovative goals in support of our strategic alliance with the Alzheimer's Association® in 2018.  Here's how we performed against these goals.

#1 - Increase Participation in the Alzheimer's Association Walk to End Alzheimer's®
With every U.S. region and home-office location participating in local Walk events, our efforts generated $3.2 million and 36,223 individual gifts toward Alzheimer's care, support and research.

#2 - Raise Awareness about Alzheimer's from Coast to Coast
We did it!  Walk Across America to End Alzheimer's, a 3,100-mile trek, was accomplished by 916 Edward Jones associates walking relay-style through 12 states and 32 regions. This four-month event culminated at the St. Louis Walk Across America October 28, 2018.

Throughout the journey, Edward Jones associates carried walking sticks "Diego" and "Gus"; they were carved from a single fallen oak tree from Ted and Pat Jones' farm. "Gus" was carried relay-style from St. Augustine, FL; "Diego" made the trip from San Diego, CA, to St. Louis. Jim Weddle and Financial Advisor Trevor Reese, representing all who walked before them, carried the walking sticks on stage completing the journey. To see photos along the way, visit the gallery.

Watch a video recap of Walk Across America

Edward Jones, the Alzheimer's Association and Washington University in St. Louis joined forces to set a new GUINNESS WORLD RECORDS™ official title for the largest human image of a brain. The feat was accomplished on April 28, 2018, when 1,202 people gathered in centerfield at Busch Stadium in St. Louis to form a multi-colored brain image.

Thank You for Your Support!
None of these milestones could have been accomplished without the passion and support of thousands of Edward Jones associates in the field and home office. You made it possible. In 2019, we will continue the fight to end Alzheimer's. We hope we can count on your continued support.

As John Beuerlein says, "We support Walk to End Alzheimer's because Alzheimer's destroys relationships and financial security — two things we have spent the last 95 years building. The 'spirit of caring' is alive and well at Edward Jones!"