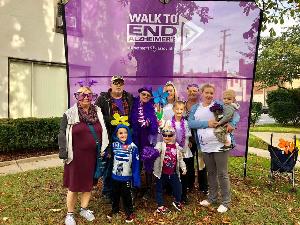 “Dementia: Is it more painful to forget, or to be forgotten?”

In Aug at age 49, Kathy Jodway was diagnosed with early-onset Alzheimer’s disease.  The diagnosis came only with the promise of mildly effective treatments and the faint glimmer of a future cure. Nearly six million Americans live in the looming shadow of this death sentence.  Only 200,000 are under 65 years of age.  Alzheimer’s is the sixth-leading cause of death in the United States.  It is the only cause of death among the top ten that cannot be prevented or cured; its progress cannot even be slowed.  At best, doctors can treatment symptoms of the disease, masking its inevitable march.

The cost of this disease is enormous.  The Alzheimer’s Association estimates Alzheimer's and other dementias will cost the nation 290 billion dollars.  Further, there are more than 16 million Alzheimer’s and dementia caregivers providing 18.5 billion hours of unpaid care valued at $234 billion

Alzheimer’s disease is relentless. So are we.Many of you know I have Alzheimers i was diagnosed with this uncureable disease. This will be Our Third walk and I hope we get a better goal than last year. We only had $200  in Donations I know we and You can do better this year

Support our team for the Alzheimer's Association Walk to End Alzheimer's®, the world’s largest event to raise awareness and funds for Alzheimer’s care, support and research. So Please donate today online Just go to Donate Button or If you like to support me and walk with our team we would love to have you Join my team......It take a village