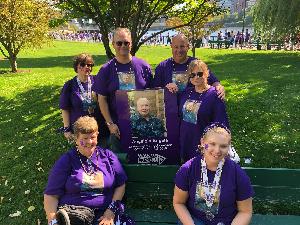 My father, Angelo passed away on July 18, 2019.  He was in long term care but had been admitted to the hospital with a blood clot.  The clot was caused by inactivity because he was wheelchair bound.  Alzheimer's had robbed him of his ability to walk.   Alzheimer's had also robbed him of his ability to communicate with us.  If he could have told us he was in pain earlier maybe the outcome would have been different.  In the end, he went quickly instead of having to deteriorate further from this awful disease.  I miss him with all my heart every day, but I know that he would want me to do whatever I could to make sure no one else suffers from this disease.

Alzheimer’s disease is relentless. So are we.  Angelo’s Angels are walking in honor of my dad, Angelo Ferraro, and every other person suffering from this horrible disease.  We walk so that someday no one will have to experience the tragic effects of Alzheimer’s.  We walk in hopes of the day when someone holds up the first white flower at a walk to symbolize they have been cured.

Support our team for the Alzheimer's Association Walk to End Alzheimer's®, the world’s largest event to raise awareness and funds for Alzheimer’s care, support and research.  Please take a minute to remember my dad and how good he was to every person he met.  Let that feeling carry you through your day.  Please donate in memory of him.  Thank you.