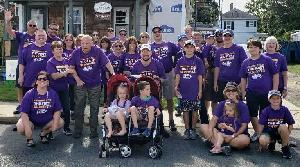 Joe's JEMs team is led by Joe Montminy, who was diagnosed with Early Onset Alzheimer's in 2017. The team is comprised of Joe's family and friends and is open for anyone to join :). The team photo is of the 2019 Joe's JEMs team during the Alzheimer's Walk in Plymouth, Massachusetts. Joe's JEMs will be participating in the 2020 Plymouth Walk to End Alzheimer's on September 26th.

Currently, there is not a cure for Alzheimer's and there are more than 5 million Americans have Alzheimer's. Our future is at risk unless we can find a way to change the course of this disease. Together, we can end Alzheimer's disease. Please consider a donation to advance the care, support and research efforts of the Alzheimer's Association.