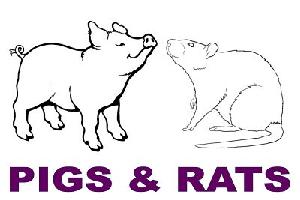 Team page of Pigs and Rats

Many people have inquired about the origins of our Team name.  PIGS came from a group of my wife's friends that raised our kids and/or worked together.  They called themselves the pigs partly because when they would get together, without the kids, the meetings would usually result in a lot of laughter at which no subject was ever TOO DIRTY.  They also started exchanging pig themed trinkets whenever they found them. RATS comes from my work in the construction industry.  For a number of years i specialized in emergency sewer repairs in Boston, Cambridge and Chelsea, as well as other eastern Massachusetts communities.  During one emergency repair in Harvard Square, Cambridge, around Halloween, we were working in front of a toy/novelty shop. One of my crew members bought a life-sized rubber rat and placed it on the edge of the trench that I was working in. I took it to the next level and installed glowing red, LED eyes and mounted the rubber rat on the hood of my next three tool trucks as a mascot.